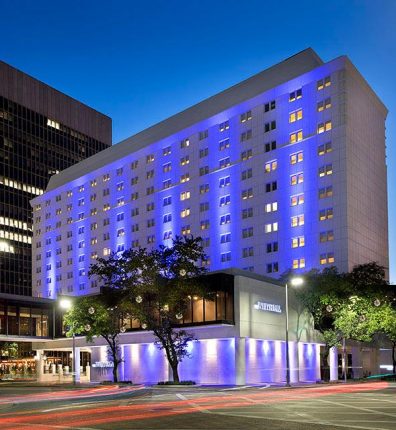 Built in 1963 in the heart of downtown Houston, The Whitehall quickly established itself as one of the city’s most stylish and well-known hotels and remains so to this day. Superbly located within walking distance of such leading business and leisure destinations as the George R. Brown Convention Center, Rice University, Minute Maid Park, and Houston’s Theatre District, the hotel is directly connected via skywalk to more than 2 million square feet of Class-A office space with major tenants such as KBR, Chevron and United Airlines. The hotel offers 259 guest rooms and 12,000 square feet of meeting space.

Sotherly Hotels acquired the property in November 2013, adding to its portfolio a prized, high-performing asset in the heart of the largest MSA in the southern United States. In 2014, Sotherly began a comprehensive $5.0 million renovation and rebranding of the hotel that included updates to The Whitehall’s guest rooms and public spaces, the creation of two new food and beverage outlets, Part & Parcel and Buffalo Bayou Coffee, as well as an upgraded look and concept for the hotel’s existing restaurant, Edgar’s Hermano.

Take me to Houston

Stop in to Edgar’s Hermano for unique Mexican-Southern fusion cuisine and a creative cocktail list that pays homage to The Whitehall’s Texas heritage.

Opened in 2016,  Part & Parcel serves up craft cocktails and scrumptious small plates in a casual outdoor atmosphere unlike no other in downtown Houston.

The Whitehall is home to downtown favorite Buffalo Bayou Coffee, which proudly roasts locally-based JAVA PURA coffee and serves a variety of homemade baked goods, sandwiches, and salads for guests on the go.

The Original Ninfa's on Navigation