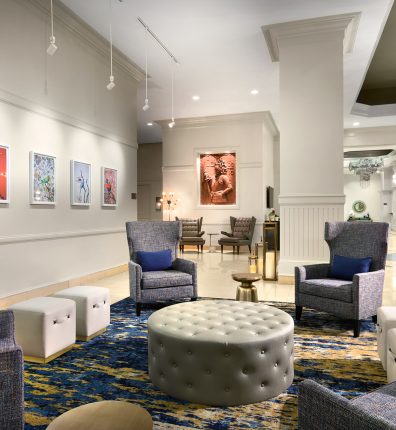 Stroll into the The DeSoto and experience the standard for Southern hospitality in Savannah for over a century. Located in the heart of the always charming Historic District, The DeSoto Savannah puts guests only steps from the trademark landscaped squares, moss-covered oaks, soulful restaurants, and memorable architecture that so vividly define Savannah. In addition to an ideal location, the hotel boasts 245 luxurious guestrooms, complete with hardwood floors and spa-like marble baths, as well as 20,000 square feet of refreshed meeting space, a second-floor pool terrace and bar, a gourmet-to-go coffee bar, and two chef-driven restaurants, Edgar’s Proof & Provision and 1540 Room.

Sotherly Hotels first acquired the property, which sits on the original site of General Oglethorpe’s barracks, during its initial public offering in 2004. The hotel underwent a $12 million dollar renovation in 2008 and then a second, $9.25 million renovation in 2017. The most recent renovation included a total refresh of all guestrooms and public areas of the hotel, including the pool deck, lobby, all meeting rooms, and both restaurants, plus the addition of a custom-curated art gallery featuring local SCAD artists throughout all of the hotel’s first-floor public spaces.

Take me to Savannah

Guests at Edgar’s Proof & Provision can sidle up to the bar for a lush libation made with one of P&P’s 120+ whiskeys – “Edgar’s Truth” house bourbon blend included – or split a handful of small plates among friends along historic Liberty Street on the climate-controlled patio.

Empress of the South

A Savannah staple since 1890, The DeSoto was once known as the “Empress of the South” due to its unmatched ability to host presidents, celebrities, local personalities, and visitors alike in a style imbued with unmistakable Southern charm and unforgettable luxury.

The DeSoto is located in the heart of Savannah’s nationally-known Historic District, just steps from many of the city’s most iconic landmarks, attractions, and cultural activities. Grab a to-go cocktail from Edgar’s P&P, then spend the afternoon strolling through the neighborhood and taking in the sights and sounds of “Georgia’s first city.”

Savannah College of Art and Design

The Public Kitchen and Bar